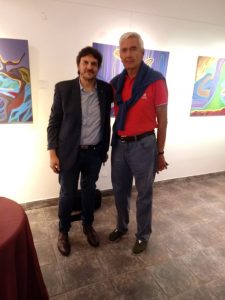 Pinamar and those who visit him will have the opportunity to meet an exceptional artist, who will show us the best of his work over a week.

The Exhibition Hall of the Directorate of Culture of Pinamar begins the year with an unsurpassed sample of the works of the renowned plastic artist Camilo Villanueva.

Although the sample will begin on January 2, the effective inauguration will take place one day later, with an epilogue on January 9.

Villanueva began painting at age 35 leaving his commercial activities to devote himself exclusively to painting.

His works are characterized by the strong contrast of colors and their visual impact.

The critic described his work as the product of a kind of alchemist who during the realization of his work, from the depths of his being, accesses a particular state of his consciousness, which makes him a vehicle towards his higher purpose. Through his painting, he provides energy, invites you to dive and be transported, raise the subtle and precipitate the dense, penetrating deep spiritual messages of love and unity. Perfect mandalas that everyone can access and use as a door to the cosmic that transmutes the soul into something different and superior, to find the keys to its evolution.

Access the paintings of Camilo Villanueva, a kind of holograms in which each of the parts contains the information of the whole, in addition to being an opportunity to enrich the spirit, it is incorporated as a useful instrument because it makes the invisible visible and allows us to feel One with the Creation.

Passionate about the internal world and the trajectory of Xul Solar, he studied painting at the Rómulo Raggio Museum (Vicente López, Province of Buenos Aires) and specialized in theory and practice of color, as manifested in his work.

He exhibited his paintings in Buenos Aires at the Bullrich Patio, the Sheraton Hotel, the Conquistador Hotel, the Argentine Rural Society (Palermo), the La Maja art gallery, the Babylon art gallery, in Punta del Este in the Yango art gallery , at the College of Professionals in Transpersonal Psychology of the Argentine Republic, which invited him to exhibit his paintings in the different congresses held, under the slogan “A different artist for a different audience”. In the 90s he was invited by Cablevision to participate with his paintings in different art programs. From 1997 to 2010 his life was spent in the Calamuchita Valley (Córdoba), where he had the opportunity to produce in quantity and exhibit in different places, including in the Posta El Sauce art gallery, Villa General Belgrano and, in the gallery Artempresa (Córdoba capital).

Once back, installed in Buenos Aires, he presents his work in several Buenos Aires art galleries and tourist hotels. In 2010 he participated in Paris, invited by Scarlet Space, with three of his works at the La Bellvillose Art Center, located in the traditional Bellville neighborhood of Paris.

Currently many of his paintings are exhibited in art portals, in different countries of the world, and are part of private collections in the United States and Australia.

“The work of Camilo Villanueva is representative of the fascinating field that we refer to as‘ transpersonal art ’. Camilo is a master of figure and form, and uses both to encompass colors never seen in an artist’s palette. His work reflects ‘the fractals and holograms of chaos theory’, making each painting take on unique dimensions that increase its uniqueness. It is ‘transpersonal’ in the sense that it presents a spiritual nature that reveals its roots in nature, both that we find in the outside world and that which inhabits the depths of the human psyche, causing inspiration and transcendence in the viewer ”, said psychologist Stanley Krippner.

Camilo Villanueva Owner of its essence and its color.

“The most easy and more difficult of the world is knowing Who we are.”
Louis Cattiaux

“The aim of art is to represent not the outward appearance of things, but their inward significance”
Aristotle